The Sterry Coat of Arms was granted to the Sterrys of Eastbury House (Ruardean Sterry Branch). The formal document signed by the Officers of Arms of the College of Arms in London establishing the right of the descendants of the Rev Francis Sterry and his father Wasey Sterry to use the coat of arms described and portrayed in the document is dated 1890. A transcription of this document is given below. With much thanks to Peter Wasey Sterry for providing a copy from the private papers of his family. 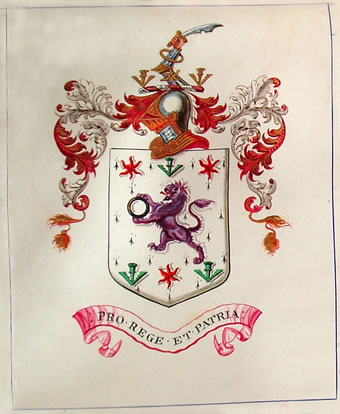 TO ALL AND SINGULAR
to whom these Presents shall come Sir Albert William Woods, Knight Garter Principal King of Arms and Walter Aston Blount Esquire Clarenceux King of Arms of the South East and West Parts of England from the River Trent Southwards Send Greeting
Whereas Francis Sterry of Eastbury Hall in the Parish of Barking in the County of Essex, Clerk, Rector of Poltimore with Huxham in the County of Devon, son of Wasey Sterry late of Eastbury Hall aforesaid, Esquire, deceased. hath represented unto The Most Noble Henry Duke of Norfolk Earl Marshal and Hereditary Marshal of England, Knight of the Most Noble Order of the Garter that he is informed upon an examination of the Records of the College of Arms that Armorial Bearings have not been established and recorded to his family and being unwilling to use any without lawful authority, he therefore requested the favour of His Grace's Warrant for Our granting and assigning such Arms and Crest as may be proper to be born by him and his descendants and by the other descendants of his father the said Wasey Sterry deceased to the Laws of Arms
And Forasmuch as the said Earl Marshall did by Warrant under his hand and seal bearing date the sixteenth day of August instant authorise and direct Us to grant and assign with Armorial Ensigns accordingly Know Ye therefore that We the said Garter and Clarenceux in pursuance of His Grace's Warrant and by virtue of the Letters Patent of Our several Offices to each of Us respectively granted do by these Presents grant and assign unto the said Francis Sterry the Arms following that is to say Ermine a Lion rampant Purpure holding between the paws an Annulet Sable in Chief a Pheon Vert between the Estoiles Gules and in base an Estoile of the last between as many Pheons Vert And for the Crest On a Wreath of the Colours In front of a dexter Arm embowed in Armour proper garnished Gold, encircled above the elbow with an Annulet Or, the hand grasping a Seax also proper pomel and hilt also Or an Estoile between two Pheones of the last, as the same are in the margin hereof more plainly depicted to be borne and used for ever hereafter by him the said Francis Sterry and his descendants and by the other descendants of his father the said Wasey Sterry, deceased, with due and proper differences according to the Laws of Arms In Witness whereof We the said Garter and Clarenceux Kings of Arms have to these Presents subscribed Our names and affixed the Seals of Our several Offices this twentieth day of August in the Fifty fouth year of the Reign of Our Sovereign Lady Victoria by the Grace of God of the United Kingdom of Great Britain and Ireland, Queen Defender of the Faith &c and in the year of Our Lord One thousand eight hundred and ninety. 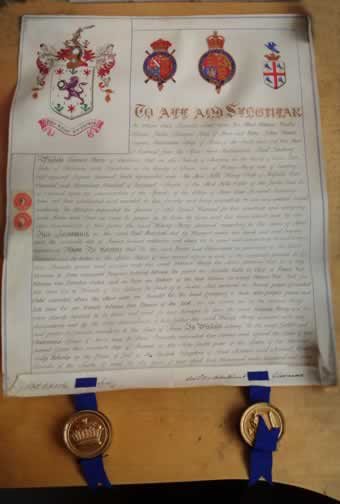