CHURCHES, GRAVEYARDS AND PLACES ASSOCIATED
WITH THE FOREST OF DEAN, GLOUCESTERSHIRE

The Forest of Dean is a geographical, historical and cultural region in the western part of the county of Gloucestershire, England. The forest is a roughly triangular plateau bounded by the River Wye to the west and north, the River Severn to the south, and the City of Gloucester to the east. 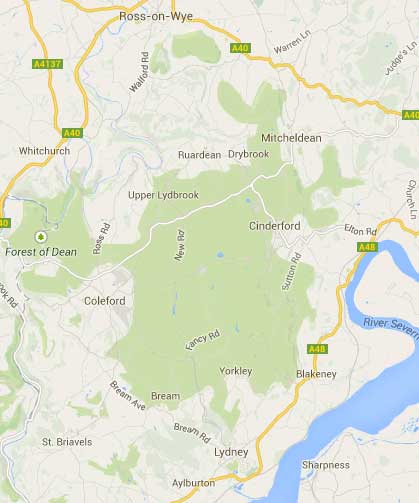 The area is characterised by over 110 square kilometres of mixed woodland, one of the surviving ancient woodlands in England. A large area was reserved for royal hunting before 1066, and remained as the second largest Crown forest in England, the largest being New Forest. Although the name is often used loosely to refer to that part of Gloucestershire between the Severn and Wye, the Forest of Dean proper has covered a much smaller area since medieval times. In 1327 it was defined to cover only the royal demesne and parts of parishes within the hundred of St Briavels, and after 1668 the Forest comprised the royal demesne only. This area is now within the civil parishes of West Dean, Lydbrook, Cinderford, Ruspidge, and Drybrook.

Traditionally the main sources of work in the area have been forestry – including charcoal production - iron working and coal mining. Archaeological studies have dated the earliest use of coal in the forest to Roman times, for domestic heating and industrial processes such as the preparation of iron ore. [Wikipedia]

The Forest of Dean is also closely associated with two main STERRY family lines: Ruardean and Longhope. The Minsterworth line, a branch of the Longhope line, also has strong links with the area.

In September 2013 David Sterry, a keen STERRY genealogist, visited the Forest of Dean area and took some excellent photos of churches, gravestones and other places particularly associated with the Longhope and Ruardean Sterry family lines. David explored the villages of Ruardean, Westbury on Severn, Huntley [where David was surprised to learn that a Rev Chris Sterry was the vicar!], Drybrook, Lydney, Blaisdon, Longhope and Newland. You can view David's photos below.