LOVE KNOTS AND NEAR NEIGHBOURS

Many of us live far away from our ancestral roots and, when contacting fellow family historians with likely connections, we often find that they are in some far flung corner of the country or even on the other side of the world. David Jones tells of an amazing coincidence, when he was contacted by someone with common ancestors in the 17th century.

All Saints, Longhope, where Richard Sterry and Jane Pitstow were married, had their children baptised, and where they now lie buried.

The 1660s were an eventful time in English history. The Commonwealth had been dissolved and the monarchy under Charles II had been restored. The austere puritanical regime was replaced by the era of the Merrie Monarch when theatres reopened and Christmas could be celebrated once more.

The dates of its catastrophes, the Great Plague of London (1665) and the Great Fire of London (1666) are well-remembered today and names such as Samuel Pepys, the diarist who recorded these disastrous events, and Christopher Wren, who designed and rebuilt the modern St Paul's Cathedral, come to mind. It was also a period of much creativity in the arts and sciences. The Royal Society was founded, the Royal Observatory was established at Greenwich and John Flamsteed became the first Astronomer Royal.

Throughout the hustle and bustle of all this activity, ordinary people went about their business, as they had done since time immemorial.  And about that time in 1660 a boy named Richard Sterry (Stirry) was born in the Gloucestershire village of Longhope, close to the Forest of Dean.  His parents must have looked after him well and he must have been strong because he survived the hazards of illness that took so many people in days before modern medicines and antibiotics, and so grew to be a fine young man. At some point he started courting a young maiden from the same village, Jane Pitstow and, on one fine historic (at least to their descendants it was historic) day Richard asked Jane to be his wife. Crucially, she said 'yes!'.  It seems likely that Richard would have asked Jane’s father for permission to marry her; it is hoped that Jane's father was delighted with the match and willingly agreed to accept Richard as his son-in-law.

The seasons came and went.  Year followed year.  Their lives would have been guided by the certainty of the Church's principal feasts, festivals and holy days and governed by the Quarter Days (Lady Day, Midsummer Day, Michaelmas Day and Christmas Day) and Cross-quarter Days (Candlemas, May Day, Lammas and All Hallows Day). Perhaps the date of their wedding would have been significant in their, calendar and the occasion celebrated with family and friends. Had Richard and Jane ever wondered about the future and whether, in some distant time, anyone would ever remember their marriage and their family, just as they, perhaps, remembered some of their antecedents?

One assumes they were overjoyed when their own children fell in love, married and had families of their own:  Abraham married Anne Turner in 1710/11 at Newent; Thomas married Sarah Hawkins in 1713 at Abenhall and Richard junior married Jane Jenkins in 1714 at Painswick.

They did not live to see their son George married to Elizabeth Hampton at Blaisdon on All Saints Day, 1717 or John's marriage in 1723/4 to Mary Parsons at Flaxley.

With each succeeding year, Richard and Jane’s children grew older and eventually they too passed away – Richard junior in 1734, Abraham and Thomas in 1747. Their only remaining son, George, died in 1771. Anniversaries to remember and celebrate changed with succeeding generations. That once special date, 30 January, when Richard and Jane married, was no longer commemorated or remembered.

Time continued apace.  Week followed week, month followed month, season followed season, another year, another decade, another generation, century followed century.  The American colonies were lost, the French Revolutionary Wars, Napoleon, Nelson and Wellington the Industrial Revolution, two world wars and the Cold War had all come and gone - what chance had Richard and Jane of being remembered after so much time? Everything had gone – well not quite everything.  All Saints Church at Longhope remained along with its parish register, recording those personal events of importance to people from a time long gone.

Then one bright morning in 2009, just after the snow had melted, David Jones, a 6x great-grandson of Richard Sterry and Jane Pitstow, descended from Richard and Jane’s son George (1695-1771), checked his emails.

Amongst the emails was one from GenesReunited.co.uk, from Judith (Judy) Foote (neé Humphreys), concerning a Richard Sterry born about 1660 who had married a Jane Pitstow.  David opened the email.  Judy had included some information about herself and her family.

David read and then he understood.  He smiled a characteristic, knowing smile and raised his eyebrows.  How amazing.  He now knew something that Judy didn't know, something that Judy could not possibly know.   How could she?  David drafted his reply carefully.  The send button was pressed and the return email was on its way.

David had been interested in his family history since the 1960s but had started in earnest in 2004 with the advent of information technology, electronic communications, on-line genealogical databases and early retirement.  He was aware of Richard Sterry and Jane Pitstow through various Internet sites, including International Genealogical Index, Forest of Dean Family History and the Sterry Worldwide One Name Study sites.

Judy has been researching her family history since 2001 and had been a member of GenesReunited for about three years.  She had been researching her husband Richard’s family tree.  By January 2009, she had discovered the Sterry Worldwide One Name Study Site and had traced her husband’s ancestry back to Richard Sterry and Jane Pitstow married in 1685/86.  Her husband, Richard Foote, is also a 6x great-grandson of Richard Sterry and Jane Pitstow, descended from Richard and Jane’s eldest son, Abraham (1686-1747). The February hotmatches on GenesReunited.co.uk provided a wealth of possible Sterry matches and Judy sent off her emails enquiring about them.

Later that day, Judy checked her emails.  David's email was the first reply.  Judy opened the email:  'Hello Judy' she read, 'It looks as though there is a match.  It would appear that your husband and I are 7th cousins – we have common gggggg-grandparents (Richard Sterry and Jane Pitstow).  Well, well, well – who would have thought that?'

Judy continued reading: 'It’s been some time since I looked at this part of the family tree and I will need to update it – but I may be able to help you with some parts of your Family Tree from Abraham Sterry (1686-1747) – my ggggg-granduncle.  I will open my Tree – have fun!'

David's email to Judy still had one sentence left, 'Perhaps we should get together to discuss this – at least Windsor Road is now open to through traffic … what do you think?'

At this point, Judy stopped, looked again in disbelief and reread: 'Windsor Road'. 'Windsor Road?'  Windsor Road is the next road to where Judy lives, less than one minute’s walk away.  The road had been closed, due to sewer and water main improvement works, but had reopened the previous day.  Then Judy realised.  It was truly amazing.  The email was not from the other side of the world nor from anywhere far away, it had to have originated from quite close to home, from very close to her home, from the only David Jones she knew who lived five minutes walk away in the same village, whose children had been to school with her children, whose children she had taught to play the piano and whose family she had been aware of for some thirty years!  The 85-mile journey from Longhope, Gloucestershire to Albrighton, Shropshire had taken the genes nine generations and nearly 350 years to come within a quarter of a mile.

And so it was that Richard and Jane’s great-great-grandchildren’s great-great-grandchildren, David Jones and Richard Foote did remember, and did have a celebratory meal with their families to commemorate the marriage of Richard Sterry and Jane Pitstow all those years ago.  As David and Richard said, they have everything to thank Richard and Jane for, since after all, without them none of this would have been possible. 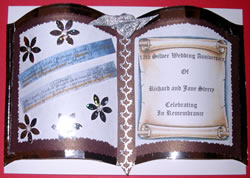 This article was first published in Family Tree Magazine in the Autumn 2009 edition. With much thanks to David Jones for allowing the article to be published on the Sterry Worldwide web site.