John Steward was now well on the way to building one of the biggest commercial trades in East Anglia and soon developed a reputation for both a rough and ready honestry and his very direct and determined manner. On at least one occasion this landed him in the Lowestoft Police Court for 'assault'. In March 1876, a rather overzealous young water rates collector called on John Steward at home at a rather inopportune time at 7pm one evening (when John Steward was resting after having been on a long business trip up north of England) and insisted on seeing the receipt of payment as proof that he had paid his rates. The rates collector insisted that Mrs Sterry go and disturb him for the receipt. John Steward must have come downstairs in quite a mood for, after indeed producing the receipt, he 'knocked his hat off and struck him across the face, and when he got to the gate defendant (Mr Sterry) said he would give him a doing to". In defence John Steward said he gave him a slap "to teach him better manners" and knocked his hat off "becuase he didn't know how to behave himself". He was also tired after his long trip. The case was found proved and John Steward was fined £1 and 8s. costs and 1s to the poor rates collector for his personal costs of attending the court. (Lowestoft Journal 15.4.1876 page 1, column 6)

John Steward Sterry died 13 June, 1908. He received a full column obituary notice in the Lowestoft Journal for 20 June 1908 (page 5) which reads as follows:

"With great regret we have to record the death of one of Lowestoft's best-known men, Mr James Steward Sterry, who passed away on Saturday evening after a prolonged and painful illness. He was ordinarily a man of robust health, of strong will power, and who, when he made up his mind to do a thing, did it. This last three years, however, he was overtaken by bodily infirmity, which, although it prevented him from actively participating in the outdoor life he loved, did not operate against his mind or will, and almost to the end he maintained that indomitable force of character which ever distinguished him. During the past few months he had been confined to his room, and last week it was apparent he was sinking, and towards Saturday he gradually got worse, his demise occurring as stated.

Mr Sterry, who lived for many years at 158 Denmark-rd, where he died, was the youngest son of Mr J. Sterry, a prominent fish merchant of his time. At an early age he went out to business and gained a considerable experience in shipping work, which stood him in excllent stead in after life. When a very young man he started in business for himself as a coal merchant-fift years ago, when Lowestoft, with its newly opened railway and developing Harbour trade, was just beginning to push forward, and thus the deceased merchant had, as it were, the flowing tide with him. Once started on his commerial career he never looked back. In his early days coal was loaded at Yarmourth and brought by road or rail to Lowestoft. That was too slow a process for Mr Sterry, who believed in having things first hand, by the shortest possible cut, and so he purchased coasting sailing vessels, which for years brought the coals direct from the North to Lowestoft. Three of these vessels are still in the service of the firm, and good ships they are. One collier was wrecked last year-the Celerity, which after a long tale of voages up and down the coast, left her timbers on the North Beach, whither she was driven by the gale's force. With the possession of his own sailing craft, which, by the way, he never insured, Mr Sterry's trade increased by leaps and bounds. Big cargoes of coal were handled year in and year out, and all this time no contract was signed. Mr Sterry's yea was yea, and his nay, nay. If he said a thing he would stick to it, and nothing would cause him to deviate. "My word is my bond," he would declare, bringing his hand to his desk to emphasise the assertion, and when this was said, it was taken for granted that John Steward Sterry would not swerve one iota. Business was business with him, and he never allowed sentiment to interfere. As he kept his part of the bargain, so he (very rightly) expected others to do the same, and if they did not-well, there was trouble. So he went on prospering, building up one of the biggest commercial trades in East Anglia a few years ago, for family purposes, the business was turned into a limited liability company, with himself as chairman, and his son (Mr J. Steward Sterry) as managing director. With the development of the steam drifting, the firm sent coal ships to Penzance and the Shetlands, and this, of course, added to the importance of the Lowestoft trade. Although he ceased practically to take an active part in business, Mr Sterry remained in close touch with all that concerned it, and many will remember the celebrated law case three years ago over the old Celerity, when he won a hard fought action. Here, despite his age, his wonderful keenness and foresight and knowledge of matters maritime were effectively shown. Mr Sterry was at one time one of the principal smack owners of the port. He had no less than seven trawling smacks sailing out of the port, but these he disposed of some years ago. He also started a char-a-banc service for country drives in the summer months, and this is still carried on by the company.

When he ceased his usual active interest in business, Mr Sterry devoted himself more than ever to his favourite pastime-yachting and angling on the Norfolk and Suffolk waterways. His old yacht, Frolic, a roomy, comfortable, and almost luxuriously equipped craft, was well known on the rivers and broads, and no matter where Mr Sterry went with her he was so well known by all the old marshmen and rivermen, that he never went by without a cordial greeting. Those who had the pleasure of spending a day or two with him up the river will remember how anxious he was to give them an enjoyable time. The Bure and the Thurne, with the outlying Broads, were his favourite resorts, and for the best part of the summer months, the Sterry house-flag was a prominent feature amongst the river-going craft.

The deceased gentlemen took a delight in sport of all kinds. He was an ardent supporter of football, as evidenced by the fact that he gave the fine silver cup bearing his name, which is competed for in the Norfolk and Suffolk League. This cup, by the way, was to signalise his fiftieth year in business. He was a regular attendant at Benacre coursing meeting, and he was the donor of a valuable cup and other prizes in this connection. [The Sterry Cup, donated in 1897 to encourage more competition league football in Norfolk and Suffolk, was still being played for in the mid 1960s as the trophy of the Anglian Combination's Premier Division. 'Lowestoft Town Football Club 1886-1997']

Those who knew the old lifeboat, Carolina Hamilton, which now takes visitors for trips from the Pier head in the summer time, are reminded that this boat was built as the result of Mr Sterry's efforts. It is now a quarter of a century or so that there came the awful Black Saturday-when storms raged and ships and men went to their doom within eyeshot of Lowestoft Pier. Owing to circumstances which need not now be recalled, the lifeboat did not go out, or went out too late, and all the while the cries of drowning men horrified those on the Pier. Amongst those who seethed with indignant excitement, was Mr Sterry, and afterwards he made up his mind to get another lifeboat. He raised funds, leading the list with a substantial amount himself, and the Carolina Hamilton was built by the late Mr Sparham and launched as a volunteer lifeboat. Some fifteen or sixteen years ago, as the bpoat was no longer needed, she was sold by auction, and she now does pleasure trips.

Although Mr Sterry did not make a parade of giving, yet he did much good in a quiet way. He had a rough and ready way with him, it is true, but he was at heart kindly and thoughtful. His wife predeceased him a few years since, and he leaves a family of four sons and four daughters."

The funeral took place at St Margaret's Churchyard on Wednesday afternoon, in the presence of a large crowd of spectators ... The coffin, which was of polished oak, with raised lid and heavy brass furniture, bore on the massive plate the inscription:- JOHN STEWARD STERRY, Died June 13th, 1908. Aged 74 years". 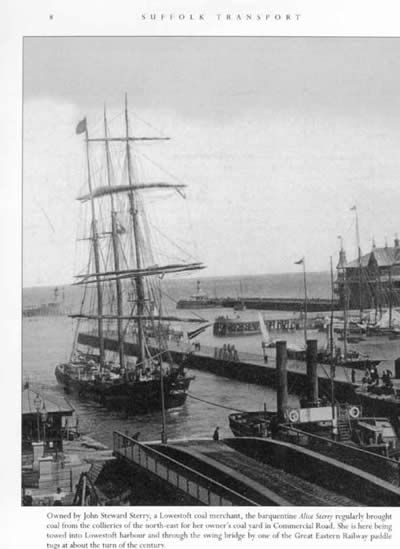