"If there ever was a first family of Wimbledon it is the Sterry-Cooper alliance. Since the early days of 1894 there has always been a Sterry or Cooper in the All England Club. They are as ubiquitous as strawberries and cream.

What the Renshaws did for men's tennis, the Sterrys and Coopers did for the women. There was the original Charlotte Cooper (Mrs Alfred Sterry), champion of the nineties. Her daughter Gwen (Mrs Max Simmers) and niece Valerie (Mrs Peter Weatherall) are still members.

I was sitting in the Members' Enclosure with Tony Cooper, now assistant secretary of the club by way of stockbroking in the City. He and his cousin, Rex Sterry (a committee member), are the last remaining males in a family whose very existence is woven in the tapestry of Wimbledon. They are both endearing characters, the one like Stilton and the other mellow as Gorgonzola.

'Ah yes, Aunt "Chatty",' Tony Cooper said. 'Of course I remember as a child being taken by her to Worple Road.

'Extraordinary, isn't it. You know she was in the days of May Sutton, Lottie Dod and that incredible Irish champion, Maud Watson. Aunt "Chatty" first won the championship in 1894, then five times in all, and I think I'm right in saying that she never heard the ball bounce because she was stone deaf. She was very accurate, of course, and she always knew exactly what the score was. In 1908, at the age of thirty-seven, which was getting on in those days, she was the oldest woman ever to win Wimbledon. That year she won all three events.

'Aunt "Chatty" used to live with her parents in a red-brick wistaria-covered house called "Founhope" in Ewell Road, Surbiton. In fact, it was right next door to the house where I was born. One day in 1908 my father, Harry Cooper, was in the garden with a chum of his, pruning the roses or wistaria or something, when "Chatty" arrived on her bicycle. He called out to her, because everyone was fond of "Chatty". She was that sort of girl. ' "Where have you been, 'Chatty'?"

'Propping up her bicycle, she replied: "As a matter of fact I have been to Wimbledon and I've just won the championship."

' "Oh, have you," replied my father, and went on with his pruning.

It was all taken rather for granted in those days. My aunt was, in fact, a jolly good player and even if she did wear a huge skirt almost to the ground and black shoes and stockings, she never served underarm and always used to rush up to the net. I remember that she cinched in her waist with a wide belt, the sort boys wear, with two silver buckles.'

Whatever Wimbledon meant to Charlotte Sterry, as she became on marriage, she was not overwhelmed by its splendour. Alter she died, the gold medal that she received as Britain's first Olympic tennis winner could not be found. Nor her Wimbledon trophies. 'Typical,' says Tony Cooper.

'I bet she gave it to the gardener,' says her son, Rex Sterry. The Sterrys and the Coopers were closely intermarried, and Tony Cooper tried to unravel it for me.

'Well, you see Rex's old mum (Charlotte Sterry and nee Cooper) is a sister of my father's and a first cousin of my mother's.' After she married 'Aunt "Chatty" ' carried on the tradition for tennis by laying a court at her home called Braemar Lodge. It was, in fact, laid the wrong way but this was no obstacle for 'Chatty' Sterry, who was never one to be put off. She had it moved round the right way." 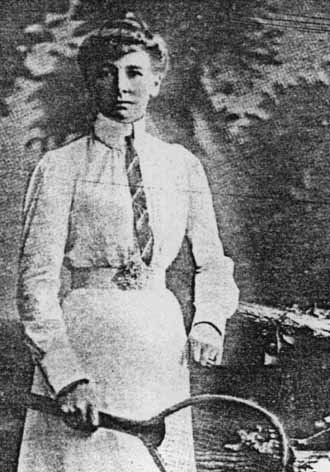 "Mrs Alfred Sterry nee 'Chattie'
Cooper, one of the most beautiful
of Wimbledon's champions."

From "The First Family of Wimbledon", 100 Years of The Wimbledon Tennis Championships, James Medlycott

Charlotte Reinagle Cooper was 30 years of age and a spinster, living at Surbiton, Surrey when she married Alfred Sterry on January 12th, 1901 at the church of St Mark, Surbiton. Charlotte's father was Henry Cooper (deceased at time of marriage), of professional rank, a gentleman. Alfred Sterry was 24, a bachelor and a solicitor, living at 6 Catherine Rd, Surbiton at time of his marriage. His father was John Sterry (then deceased), a Wine Merchant. Witnesses to their marriage were Teresa Georgina Cooper (Charlotte's mother), Harry Cooper, Emma P. Sterry (Alfred's mother) and John Sterry (Alfred's brother).

According to the 1881 British census Charlotte was born abt 1871 at Ealing, Middlesex. In 1881 she was aged 10 and living with her mother, Georgina T. (then a widow aged 39, born in America), her brother Sam. E. (aged 13 born America) and her sister Maud J. (aged 11 born Ealing). Living with them in 1881 was a boy aged 10, also born in America: Herbert F. Patrickson and two others, who were probably servants: Caroline Jarvis (unmarried, aged 29, born Nettlebed, Oxfordshire) and Lizzie A. Bye (unmarried, aged 19, born Reading, Berkshire).

Alfred was born in the second quarter, 1876 in the registration district of E. Preston, Sussex (GRO 2b, 332) and appears in the 1881 census aged 4 born Worthing, Sussex. His family were then living in Broadwater, Sussex. His father, John, is aged 5? born Leyton, Essex. (The Registration District of Preston East included the parish of Broadwater at this time and probably the town of Worthing, although Worthing was not included as a parish at this time.) His mother was Emma P. (aged 42, born London, Middlesex). He had two brothers John S. aged 11 (born Nut...?) and Percival (born Nut...?). A search of the Bishop's Transcripts for Leyton Parish Church and Saint John Baptist's Chapel Baptisms, Marriages and Burials 1820-1849 (LDS Film 1702435) did not locate John Sterry's baptism or any other Sterry entries.

The baptisms of Alfred's brother's are in the IGI for Nutfield, Surrey:

John Sterry and Emma Percival Stringer were married by Licence on 17 April, 1866 in the Parish Church of Nutfield, Surrey (2nd quarter 1866 in Reigate Registration District. GRO 2a, 220) Both were 'of full age' and single; both were resident in Nutfield at time of marriage. John's occupation was 'gentleman' and his father was Henry Sterry, "Esquire". Emma's father was John Stringer, also "Esquire". Both signed. Witnesses were Rose M. Q. Nash, Edgar P. Stringer, Frederick Wrench, Fred Bidwell and W. Sterry.

John Sterry, Alfred's father, died on the twentieth of November 1882 at 3 Manor Villas, Worthing, aged 76. His occupation was listed as Wine Merchant (retired). Emma Percival was present at his death. John was therefore born abt 1806 and would have been 75 at the time of the 1881 census and he was still producing children when he was 66 years old! Young Alfred Sterry would only have been 5 when his father died.

John Sterry was born 27 November 1805 and died 20 November 1882 son of Henry Sterry and Beatrice Harman on the Lowestoft Sterry Line.

Henry lived as of his marriage at Crutched Friars, St Olave's Parish, Southwark, county Surrey, and was a wine merchant.

There were other children to this marriage:

There are several probate records for other members of this rather wealthy Sterry family:

1864
STERRY Elizabeth Effects under 6,000 pounds 6 October.
The Will of Elizabeth Sterry late of Nutfield near Reigate in the County of Surrey Spinster deceased who died 9 September 1864 at Penzance in the County of Cornwall was proved at the Principal Registry by the oath of John Sterry of Nutfield aforesaid Esquire the Brother one of the Executors. (Elizabeth Sterry born 1796 above.)

1873 STERRY Charles Esq. Effects under 12,000 pounds 4 December.
The Will of Charles Sterry formerly of the Royal Mint but late of 53 Tregunter-road West Brompton in the County of Middlesex Esquire who died 5 November 1873 at 53 Tregunter-road was proved at the Principal Registry by the Reverand Alexander Israel McCaul of 39 King-William-street in the City of London Clerk and Richard Thomas Daniell of 20 Cathcart-road West Brompton Surgeon the Executors. (Charles born 1811 above and brother of John Sterry)

1880 STERRY Sarah Maria Personal Estate under 300 pounds 11 October. Administration of the Personal Estate of Sarah Maria Sterry (Wife of Charles Sterry, Esquire) formerly of the Royal Mint in the City of London but late of 53 Tregunter-road West Brompton in the County of Middlesex who died 17 December 1872 at 53 Tregunter-road was granted at the Principal Registry to the Reverend Alexander Isreal McCaul of the Rectory London Bridge London Clerk and Richard Thomas Daniell of 20 Cathcart-road West Brompton Surgeon the Executors of the Will of the said Charles Sterry. (Wife of Charles Sterry above.)

1887 STERRY Anne Eliza Personal Estate 18,503 pounds 10 shillings and 9 pence 7 June.
The Will with a Codicil of Anne Eliza Sterry formerly of 4 Upper-Gloucester-place Dorset-square but late of 40 Abercorn-place St John's Wood both in the County of Middlesex Widow who died 16 April 1887 at 40 Abercorn-place was proved at the Principal Registry by Frederick Holden Turner of 40 Bedford-row in the said County Solicitor and Frederick Mildred the Younger of 62 Lombard-street in the City of London Esquire the Executors. (Wife of Henry Sterry born 1799 above.)

Walter Smith's book on the Sterry Family on page 295 has an interesting reference to Perceval Sterry (1871-1900). He evidently wrote to Rev. Francis Sterry in the 1893 on the subject of family history. (Perceval's father, John Sterry, was then deceased.) Evidently Francis had written to John Sterry in 1877 on the subject. Perceval refers to a Sterry pedigree tracing back to Joseph Sterry born in 1633 which "John Sterry of Redhill" had compiled. Smith suggests this John Sterry could be the same John Sterry (1805-1882) now identified as the father of Alfred Sterry.